Mike wrote:Ahhh, but do you have a sonic screwdriver?

Visited the local Sonic drive in ... lime, lemon, strawberry drinks are on the menu (http://www.sonicdrivein.com/menu/sections.do) ... but, no screwdrivers. I must be missing something!!!

Looks like on June 7th we will have all eight members of 180 Go! flying together for the only time this year.

Should make for some unbelievable flying, spectacular crashes and possibly some rather large knots to untangle.

Will be there Sat & Sun. got the room at HInn.
Looking forward to it all. and maybe ill get more than just the single line stuff out :)
Jp
Top

I'm looking forward to it also.
We can do a mega fly of more than 8 team kites too.
Rose and I will be getting in late Friday night, probably after midnight.
Top

Winds went from 0 to strong and steady by late afternoon. A few raindrops fell in early afternoon, but not enought to get anything wet.

Nice to meet you and your son!

What a fun day!
[align=center]"When the power of love becomes more important than the love of power, then there will be peace"[/align][align=center]-Jimi Hendrix[/align]
Top

[align=center]"When the power of love becomes more important than the love of power, then there will be peace"[/align][align=center]-Jimi Hendrix[/align]
Top

great festival, great time with everyone.

Saturday was a slow and chilly start. Winds did finally pick up in the afternoon and we had a great time flying. We got RevChris and Jynx in the mix and it was just fun..

Elie and Maggi ended up kicking Mike Stephensons butt late in the day and all I can say is that Mike was very lucky as Elie ate so much candy throughout the day that she barfed 5 times when she got home. I can attest to the fact that barf does NOT ruin the 180Go! shirts as Elie painted one up very nicely.

Needless to say, I was in the crapper with Jenny for letting Elie eat so much crap. But even in the midst of her filling a bucket, she was still asking to go again the next day...lol

Sunday was basically a no wind day... We did some low (no) wind flying and actually pulled it off pretty well while in 4 man groups. We also FINALLY got some group photos of the entire team.

And I spent an hour looking for Elie as she decided that she wanted to 'do her own thing' as she told me when she finally showed back up at the Chicago Kite Tent. There is nothing like having your wife pissed at you for letting your kid gorge herself on candy only to lose her the next day and consider what mad REALLY might be. It was almost my turn to puke...lol

Anyway, it was all fun and next fest, Elie will be dogstaked to the field...lol... or else will be wearing a kid tracker... lol...

Many thanks to the Naperville Park District, Dave at Chicago Kite and especially Jennifer for letting Elie tag along with Her, James and Maggie...

They that can give up essential liberty to obtain a little temporary safety deserve neither liberty nor safety...
Benjamin Franklin, Historical Review of Pennsylvania, 1759
■
Top

Butt Kicking All the Way Around!! by youngster or by kite... 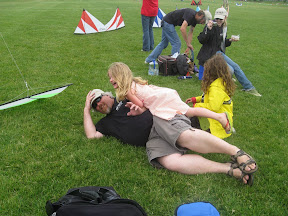 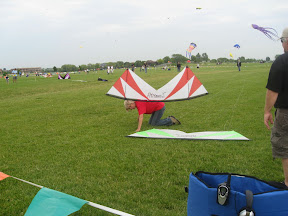 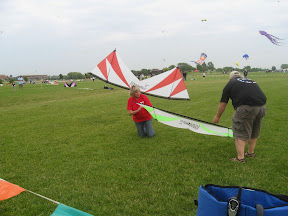 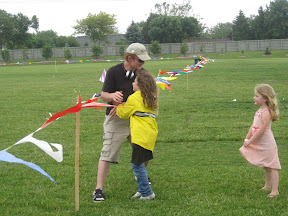 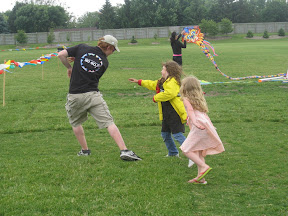 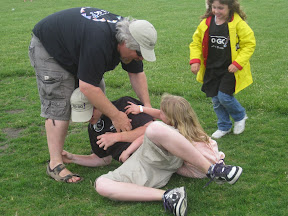 LOTS of fun!! Thanks to EVERYONE!!! Many thanks to Fred from Naperville Parks & Dr. Z from Chicago Kites & his crew.

Actually found its not bad doing sle-big stuff one day and quad line for the second.
I didnt take anyone out with the Rev!!! But the ike-ROK took care of business when it was flying in a different wind pattern than the show kites. Jeff H.'s power sled decided to dance and got knocked out of the sky. 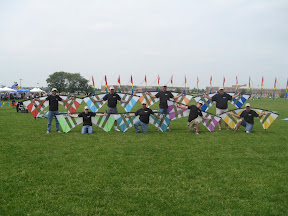 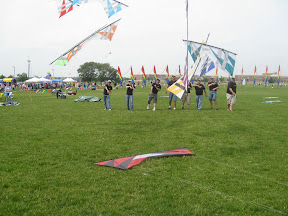 
Super plus to put some faces with names! like Jinks and Draftnik. great to meet you!

I think you can view these whether or not you're a Facebook member. If anyone has trouble, let me know.
Keep calm, and park it in the pocket

Keep calm, and park it in the pocket

Please note that the McKite that flashes across the screen, like Hitchcock in one of his movies, is Jynx's. On Saturday, I noticed that Jynx's McKite looks exactly like mine except for one thing ... it's a reverse pattern. Both kites have an asymmetrical pattern, but her kite starts with a raspberry triangle in the left corner and mine starts with that same triangle in the right corner. That could make for an interesting stack ... alternating asymmetrical patterns.

Sorry I missed all of the winds Saturday afternoon. The grandson broke both bones in his forearm ... turned out he was trying to ride his two wheel bike with no hands while going down hill. I would blame it on his age ... 4 1/2 years old ... but his dad was just as bad trying to copy the big kids. Luckily the orthopedic surgeon was able to reset it with no complications, so he didn't have to stay the night in the hospital. His main complaint was the IV and the fact that he was hungry ... had to wait eight hours without eating so they could put him out to reset the bones.

Poor Hunter--give him our best.
Top

Tom, Glad to hear things are better not worse with the arm!
~ i did forget about the commentary

Just keep the speakers down or off

I wish I could have gone to Naperville, and I'm bummed that Jeepster had to come back, but I sure appreciated his help. My wife was out of town too.

Hunter is doing much better today. He is back to harassing his sister and Amanda said she has had enough of him sitting on the coach bossing her around. It is going to be a long six weeks for sure, but I'm glad it was able to be fixed and the doc said it should be good as new. It is amazing because his forearm arm was at a 45 degree angle both he radius and ulna were completely broken, I thought the movies were fake looking, but it turns out that's what a severely broken arm looks like in real life.
Last edited by DB Cooper on Tue, Jun 09 2009, 06:26 AM, edited 1 time in total.
Top

Tom and Jamie sorry to hear about Hunter and glad to hear all is better then thought.

As far as the fest goes it was good when the winds were blowing, but just like every year past the winds always seem to come out of the south and swirl around when blowing. So you never know which way you are going to be flying at any given minute.

Denny it was great to see you out at a field, its been WAY TOO LONG!! Lets not let it be soooo long before the next time!!

and CONGRATS on the grill master gig.

and as always dinner after wards was fun.

What do kite fliers do when they're bored?

And my personal favorite..."Have you ever heard a pig eat?"
[youtube]3PVBGOFM8Y4[/youtube]
Top
Locked
41 posts

Users browsing this forum: No registered users and 1 guest